This video is about 100 Years Kea Shipwrecks. Richie Kohler made a tribute to Carl Spencer during the flotilla outing on Friday 30th Sept. 2016 in the Kea Channel, Cyclades, Greece. Wreaths were tossed over the position of the HMHS Britannic shipwreck commemorating the 100 years anniversary together with S/S Burdigala sunk 7 days before Titanic’s sister-ship.

In June of 2009, the British diver-explorer Carl Spencer lost his life during a National Geographic Expedition.

Burdigala as a Paquebot 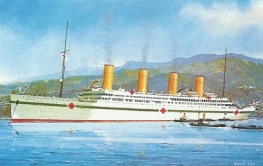 The three protagonists in model scale; note the difference of size of each vessel

Burdigala as an Auxiliary Cruiser in heavy seas

HMHS Britannic at the time of sinking